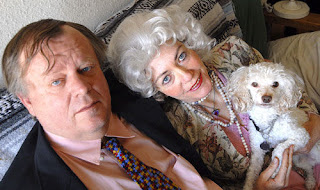 Jerry Newport and Mary Meinel just published Mozart and the Whale: an Asperger's Love Story, a memoir of their life together. They both have Asperger's syndrome, a form of autism.

FLAGSTAFF - Jerry Newport and Mary Meinel joined their two families of birds when they married on Jerry's birthday in 1994.

"The birds got along very well," Jerry said. "They all have double-digit ages."

Besides their 13 birds - five cockatiels, six parakeets, one dove and a cockatoo - the two share a condition, Asperger's syndrome, a form of autism that affects millions of Americans.

Asperger's and other forms of autism are complex developmental disabilities that make social interaction and communication difficult. Maintaining personal relationships can also be daunting, and isolation often sets in.

After their first marriage, a separation in 1997, a divorce in 1999 and a remarriage on Valentine's Day 2002, the couple is still together, refusing to give up in the face of many challenges.

"Mary wasn't sure what kind of future we had, but she was sure we were better off together in some way than we were separate, and she's right," Jerry said.

Today, the Newports live in Flagstaff and have added Wolfie to the family unit, a fluffy-white poodle mix they got at a local animal shelter.

Their story was the inspiration for the 2005 movie, Mozart and the Whale.
Starring Josh Hartnett as Donald (Jerry) and Radha Mitchell as Isabelle (Mary), the movie had a short run in Spokane, Wash., where it was filmed, and was released in DVD at the end of 2006.

The movie's title comes from the costumes they wore to celebrate Halloween - Willy the Whale for Jerry, and Mozart's sister, Maria Anna Mozart, for Mary.

Reversing the usual cycle of movie based on book, the Newports have just published a memoir, Mozart and the Whale: An Asperger's Love Story.

The book was co-written by People magazine writer Johnny Dodd and is moving up fast in book rankings based on sales, Jerry said.

People with Asperger's syndrome can be high functioning if a bit eccentric.

Asperger's syndrome was named in honor of Hans Asperger (1906-1980), an Austrian psychiatrist and pediatrician, who described his young patients as "little professors."

The Newports are savants who can perform remarkable feats in specialized intellectual areas, Jerry at math and Mary at music.

With unique personalities, the Newports have become celebrities in the world of autism, featured twice on 60 Minutes.

Because they often have a foot in two worlds, the conventional and the autistic, people with Asperger's are of special interest to people studying autism.

"It's a different culture," said Susan Marks, a special education professor at Northern Arizona University. "Adults with Asperger's are able to provide us a window as to what a child who has autism is experiencing, but is unable to speak. They can tell us what the sensory experience is."

With a degree in math from the University of Michigan, Jerry is a whiz at the subject.

During an interview, he took less than a minute to calculate he was 21,333 days old.

"I started off as a 7-year-old, discovered for being able to do things like square roots in my head, with as many decimals as people wanted," he said.

Because of their difficulties communicating socially, people with Asperger's may not be able to earn a living in their areas of interest.

Jerry works part time for Friendly Cab in town, where he said he is treated well and is becoming a good driver.

Mary, 52, who was born in Tucson, worked in Hollywood as an actress and doesn't consider her form of autism a disability.

"I always considered it a plus," Mary said. "That's where the savant comes from."

Inspired by Russian composers, she bought a synthesizer to compose Neoclassical music.
Another passion is sewing. Mary said she wants to fashion an updated version of her Mozart costume from some new red brocade fabric.

"I'm just bound and determined to cash in on life, to live it to the fullest," she said. "You should have a lot of dreams and see how many of them you can fulfill. You should do what you'd rather be doing."

The original source for this article can be found here:

This is another article that I have found about Jerry and Mary Newport.

I have posted other articles about the couple previously which can be read here:

Additionally, content about the movie 'Mozart and the Whale' which is based on their lives can be found here:

robert_bond75
I am a 23 year old film, media and journalism student at University of Wales, Bangor. My passion in life is film and i actively pursue this interest through both watching and reviewing films and making them. I have a condition called Asperger's Syndrome, which is a form of Autism that affects my ability to socialise and function in the world and makes it difficult for me to make friends.

Other Blogs and Sites of Interest